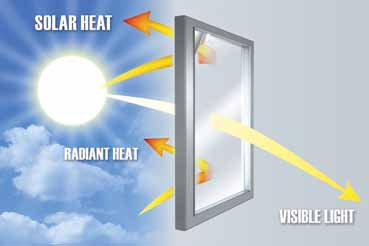 Solar film is an amazing way to keep your energy budget low and still enjoy consistent home heating. It is an innovative way to sustain your home temperature without emptying your bank savings.

You will enjoy multiple benefits with solar film usage and still protect your home up to 80% from solar heat. Solar film is unique in that it’s the real spectrally selective film on the market, using spectral selectivity to keep out sunlight from your home and prevents its damaging effects out-rightly.

What is a solar film?

It is the alternative to tinted and reflective glasses. This flexible film improves a window pane through rejection of high levels of solar infrared heat to protect against glare and excessive UV heat.

Types of solar film on the market

Presently two types of solar films are available – metallic and ceramic films. The metallic is made by vaporizing metals which bonds to the films to become the metallic solar film. Other manufacturing process states that metallic films are made by electrically charged gasses which dislodge metal molecules from silver and deposit the molecules on the tinting film. The metal coating on the film reflected solar heat and based on the metal shade cuts glare coming through the windows. The downside of silver, however, is corrosion under extensive use.

On the other hand, sputter metalizing method is used to coat the ceramic film variant. The ceramic film uses oxidized alumina, carbide, zirconia and titanium in its making. The ceramic film rejects solar energy heat from entering the through the windows. The ceramic variant is never corrosive or gets discolored even under intense use.

The technology was developed for the US aerospace programs using the sputtering technique to embed tiny exotic metal particles in the optically clear polyester film to create the solar film product.

Whether used for car or home, the solar film comes with incredible advantages that make it one of the best purposes driven tinting film technology to use. A few benefits of the solar film are outlines below.

The sun gives off two types of energies – the IR & UV lights. These light spectrums are what we usually refer to as sunlight or visible light from the sun. On the low side of sunlight is the low spectrum called infrared (IR) while of the high end of the spectrum is what we call ultra-violet light (UV). The IR is the heat generator as it produces an intensity of heat from the sun. On the other hand, the UV causes radiation which is the leading cause of skin cancer and fading. With these two high-impact reflections from the sun, the solar film protects us from the adverse effects of these forms of lights.

No one wants to experience skin cancer as a result of UV light, and the intense heat that results from IR makes for discomforts from excessive heat. What solar film does, therefore, is to make selective blockage of IR up to 90% and up to 99% of UV and allows up to 70% of visible light into the house for optimum and cool light in the house which is what is required for the eyes to see properly. Therefore, the solar film helps to filter out from home it was installed, 90/99 percent of IR and UV respectively.

Without solar film window, all sunlight properties will come into the house and wreak great havoc on both human and properties in the home. But in a solar film window protected environment, the product make selective filtering of incoming sunlight, extracts useful sunlight up to 70% of what is good for the eyes to see and filters out destructive elements of IR and UV lights.

While the solar film is adjudged as excellent for keeping the home safe, it is important to note that the right type, quality, and grade of solar film window must be installed to achieve the best results. For this reason, it is essential for homeowners wanting to install solar film to contact the right professional.